The Haas Promenade is one of the best places to start a tour of Jerusalem. This panoramic viewpoint offers a sweeping view of the city and, in true Jerusalem fashion, is itself replete with thousands of years of history.

The promenade – popularly known in Hebrew as "the Tayelet" – actually comprises several walkways: the Walter and Elise Haas Promenade, the Richard and Rhoda Goldman Promenade and the Gabriel Sherover Promenade. From the heights of these landscaped walkways and parks, you can enjoy the full splendor of the city of Jerusalem spread out at your feet. 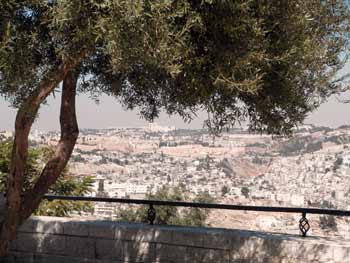 Stroll along or rest at any of the observation terraces, from where you can see the City of David, the Temple Mount, with the Noble Sanctuary (Dome of the Rock) glittering in the sun; the pure white dome of the re-built Hurva Synagogue to its left; the Mount of Olives, with its spire of Augusta Victoria Hospital reaching for the sky. Slightly behind it, you can spot the tower of Hebrew University on Mt. Scopus.

On the other side of the Old City, the buildings of Mt. Zion are clearly visible, along with other more modern landmarks, such as the King David Hotel, Jerusalem's famed luxury hotel with a fascinating history of its own and still visible between some new skyscrapers, the tower of the Jerusalem YMCA. 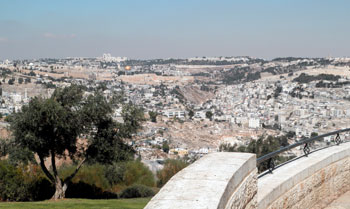 The view is especially resplendent in the glow of dusk, when Jerusalem's white stones shimmer with a golden hue.

There's more to this area than simply the view – although the view has played a part in its history. The high ridge along which the promenades run lies to the south of the city. Today is called Armon Hanetziv – the palace of the commissioner – for the residence built here by the British in the 1930s as the home of the High Commissioner. But its first mention may be in the Bible: 'Abraham looked up and saw the place in the distance. He said to his servants, "Stay here …"' (Genesis 22:4-5). Tradition has it that this is the place from which Abraham saw the mountain where he was to bind his son Isaac. (That mountain is Mt. Moriah, the Temple Mount, clearly visible from here.) The Armon Hanetziv ridge is the first from which the Temple Mount is visible when approaching from the south.

More than two thousand years ago, in Hasmonean times, an aqueduct was built that brought water from pools in Bethlehem to Jerusalem and the Temple. The aqueduct and water shafts dug through the rock still exist, and it is possible to walk through some segments of the shafts. (See below for tour information.) 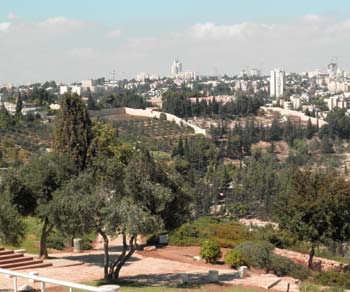 Today, this is an idyllic spot for a romantic picnic, and amid the peaceful olive groves, it is hard to remember that ridge has been the site of historic battles. The strategic importance of these heights makes them extremely valuable to whomever controls Jerusalem.

In 1948, the Brisith left the High Commissioner's Residence to the Red Cross, but it was later handed over the UN observers, who still use it today. During the Six-Day war, however, the Jordanians ousted the UN observers and took control of the residence and the Armon Hanetziv ridge, from where they could easily bombard the city below. The Jerusalem Brigade captured the residence, pushed back the attacking Jordanian army and from here were able to liberate the Old City of Jerusalem.

Since then, the area has been developed with the building of the Haas Promenade, the Sherover and Goldman promenades and lovely parks. It's become a peaceful oasis from which to meditate on the uniqueness of this wonderous city.

In fact, several of the Jerusalem tours we recommend here, actually begin with a stop at the Haas Promenade. 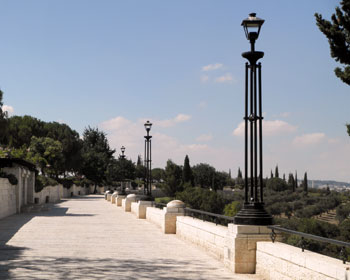 Activities at the Haas Promenade

Today, in addition to attracting tourists for the panoramic view, or couples seeking a place to walk, the Sherover, Goldman and Haas promenades also appeal to families looking for kid-friendly things to do in Jerusalem.

Hiking Through the Lower Aqueduct

The City of David offers guided tours of the lower aqueduct. In addition to the underground hiking experience, the tour offers the opportunity to learn about the stunning feat of engineering that went into building the complex waterworks of Hasmonean times and lasts about an hour and half. 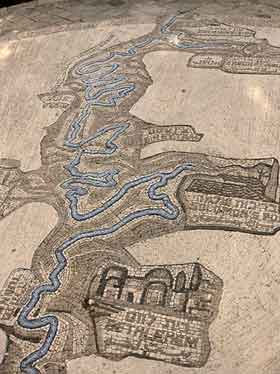 Note that this water shaft is dry. You will need a flashlight. There is a lot of walking involved. Not suitable for people who are claustrophobic or for small children. No babies in strollers allowed.

You can rent Segways or bikes to enjoy the area. Segways are for adults over 18 years old only.

The City of David also offers a two-hour guided tour on segways. Call *6030 for more details.

Bicycle rentals include “trolley” bikes for up to nine people and are lots of fun. Both segways and bikes are available from the Haas Promenade parking lot.

The Peace Forest educational center at the end of the promenade is the location of Jerusalem Paintball, a competitive group activity for adults and children over 12. The game can last 1-2 hours. Cost: 100 shekels per person, includes 100 eco-friendly paintballs. 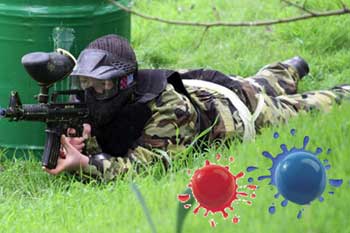 It is also home to the Pine Cone Workshop. Designed for groups of 10 or more, including for preschoolers, the pine cone workshop teaches youngsters and accompanying adults to make art and souvenirs from pine cones. Set in the Peace Forest by the promenades, this is a lovely activity for groups of little ones and their parents or grandparents.

Return from the Haas Promenade to Jerusalem Home page.