Jerusalem song. More than almost any other city, Jerusalem is  praised in music. From ancient Psalms to hymns to rap songs, there is one for you.

Here are some of the greatest songs of the holy city.


Walk through Jerusalem and you'll hear music on street corners or drifting through alleys from musicians celebrating our city in song. 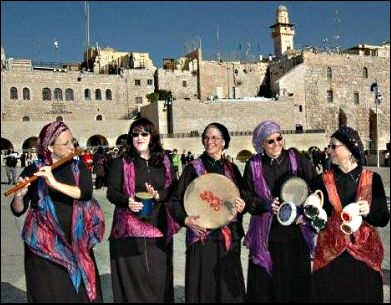 Matisyahu put Jerusalem on the map of hit parades again just recently, with his song of the same name, but the holy city has been praised in song for thousands of years.

King David’s Psalms celebrate it over and over; Psalm after Psalm is replete with Jerusalem lyrics. And artists as different as Phish, U2 and Mahalia Jackson have all sung of Jerusalem.

Over the centuries, Jerusalem has become a symbol of returning to former glory – as in songstress Anouk's Jerusalem – or of building a new glorious place: the unofficial anthem of England is the hymn Jerusalem, in which the singer longs to make England in a new Jerusalem. (Sorry folks – Britain will never be Jerusalem. Appreciate being in England – we’ll enjoy being in the real Jerusalem!) By the way, that's the song that gave the movie Chariots of Fire its title.

Here I’d like to share with you my ever-growing Jerusalem song collection. Where I’ve been able to obtain permission from the songwriters and publishers, I’ll also provide you with my favorite Jerusalem lyrics.

Each link below takes you to a page about the story behind that particular song and the artist who sang it as well as related music videos and Jerusalem lyrics.

World-class musicians have recorded entire albums devoted to Jerusalem. I love the haunting melody of Jerusalem Awakening and the album City of Gold by Sunita Staneslow, one of Israel's foremost harpists.