The American Colony Hotel Jerusalem is one of the most popular hotel among foreign correspondents and diplomats. It is also rumored to be the haunt of more than a few spies, which adds just a touch of underlying excitement to a Jerusalem hotel that is a quiet oasis of graciousness intent on taking you back to more genteel times.


Don't let the luxury fool you, though. This hotel has also been a shaping force in the city's history. 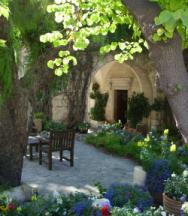 When the mansion was built in 1865, it was one of the first buildings outside the walls of the Old City and stood alone in an isolated wasteland. It was meant as a home for a rich administrator of the Ottoman Empire and his four wives. Each wife had both a summer and a winter room in house. The husband died without heirs and the building stood empty until the American Colony rented it (and eventually bought it) in the late 1890s.

The American Colony was started by Anna and Horatio Spafford. The couple was a magnet for tragedies: they suffered through the Great Chicago Fire, their four children died in a cruise ship accident on the way to Europe and then a fifth born later died of illness. Looking to overcome their sorrow, the couple moved to Jerusalem with a few friends in 1881, intent on doing good works.

They established a self-contained commune focused on bettering themselves and helping others. Although deeply religious, the community never missionarized - Horatio Spafford once explained he could not hope to change another person unless he had first worked on his own spiritual state.

In 1896, the Americans were joined by some Swedes and the colony members moved into the present building. The commune kept livestock on the grounds, ran a blacksmith shop, a bakery and dairy.

In 1898 Kaiser Wilhelm II of Germany visited Jerusalem. Two members of the colony, Frederick Vester and Elijah Meyers (who also documented the First Zionist Congress in Basel, Switzerland in 1897) recorded the visit in photographs. Photographs of the Holy Land became in vogue throughout the Western world and the American Colony photographers provided what remain some of the most interesting early photographs of the city.

The colony began taking in boarders in 1902 at the request of Baron Ustinov (the grandfather of actor Peter Ustinov). He owned a hotel in Jaffa, on the coast, but needed a place to lodge his guests who wanted to visit Jerusalem. Thus was born the American Colony Hotel Jerusalem 's most gracious place to stay.

During World War I, the colony organized soup kitchen to feed the hungry (up to 2000 people a day!) and formed the American Colony Hotel Jerusalem nursing corps. As the Allied armies approached, the Turkish governor dropped in on Mrs. Spafford to tell her he was about to surrender the city. He had no white flag with which to meet the British. Thanks to Mrs. Spafford, 300 years of Ottoman rule over the Holy Land ended with the Turks flying a white bed sheet from a Jerusalem hotel.

With the end of British rule in 1949, the hotel ended up on the Jordanian side of the city, only a few meters away from the Mandelbaum gate, the only cross point between the two parts of the city. It was heavily damaged by fighting then, and again during the Six Day War. Since then, however, the rooms have been restored to look much as they did in the 1860s. 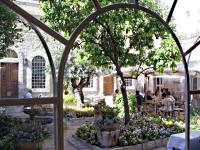 The hotel is very much a meeting of many cultures. The grounds are spectacular and you can sit in the beautiful inner patio, where you can have coffee under a shady tree, and see if you can spot a spy. (Rumor has it that during the British Mandate, the hotel hung a sign in the lobby warning patrons not to discuss military matters in public!)

To Stay at the American Colony Hotel

Enter your dates in the search box below and click "go" to check room availability and rates.

Our search engine will go through the 30 biggest reservation sites on the internet to find you the best rate possible.

Your search results will open in a new window.

In the new window, click on the hotel name and you'll also find photos, maps and more details on the American Colony.


Make your reservation at the American Colony Hotel Jerusalem now.

On a cautionary note, the American Colony Hotel Jerusalem is located in one of the few unsafe neighborhoods in town. Security is tight around the American Colony but we would recommend taking taxis to and from the hotel rather than walking around alone.