The King David Hotel Jerusalem is testimony that when it comes to Jerusalem hotels, many of them are more than just a place to stay. They are ripe with stories to tell. 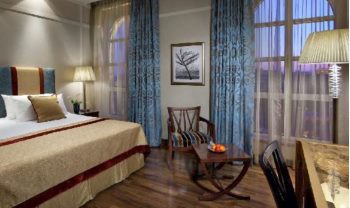 This is the best known hotel in Jerusalem and with good reason: it is regularly voted one of the most luxurious hotels in the Middle East.

Comfort, attention to detail and an attentive staff make this a world class hotel.  Amazing views of the Old City make it unforgettable.

In its own right, the King David Hotel is a historical landmark. It was built in 1929 and opened in 1931. Originally, it was only four stories high and had 200 rooms, some of which actually had hot running water – an unheard of luxury at the time! 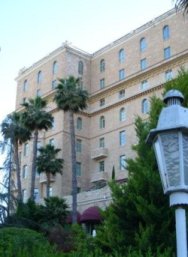 Although plain on the outside, the inside makes up for it with elaborate motifs that are meant to make you feel you are in a Middle-Eastern palace. And in fact, the King David Hotel Jerusalem has hosted many royal dignitaries.

Spend some time hanging out in the lobby and there’s no telling who you might see – of all Jerusalem hotels, this the one where U.S. President Bush stayed when in town, as have Prince Charles, Prince Phillip and other celebrities, from Ben Kingsley to Mohammed Ali. During World War II, King George II of Greece and his government in exile set up shop in the King David after fleeing from the Nazis. In 1938, the British took over a wing of the hotel to house their administrative and military headquarters.

Reading the Floor at the King David Hotel

Don't be surprised if you see people slowly crossing the lobby, staring at the floor - they haven't dropped their keys! Inlaid in the floor is a long strip of white stone with the signatures of many of the celebrities that have stayed at the King David Hotel Jerusalem.

Kids love this - we've spent more than an hour at times examining the signatures and teaching world history, going through a who's who of the 20th century.

From the lobby, turn right into the Reading Room. The parquet floor and lighting are original. Check out the cool ceiling, too. The table in the center of the room is the one on which Prime Minister Yitzchak Rabin and King Hussein signed the historic peace treaty between Israel and Jordan. (The table was lent out for the occasion - the treaty wasn't signed in Jerusalem.)

In the Reading Room you'll also find old photographs depicting the hotel's history, but the most famous event - a tragic one - related to it is hardly mentioned. You can read all about it in O Jerusalem

Today, the hotel has a variety of luxurious rooms and special suites. Even if the rooms are a bit out of your budget, you can come relax in the lobby or have tea on the garden terrace. 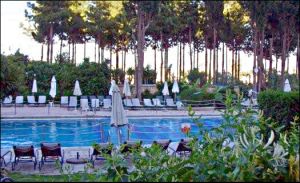 You can also use the swimming pool in the lush gardens. It's been featured as the backdrop to several movies (including one of my favorites - Sword of Gideon

- in which my good friend Lois was an extra. She can be spotted right behind Steven Bauer, Michael York and Peter Dvorsky as they sit by the King David hotel pool!)

They say if you hang around this Jerusalem hotel long enough, you're bound to see someone famous!

Find the best deal, compare prices, and read what other travelers have to say or make your reservation on TripAdviser  now.