Jerusalem YMCA
a Monument to Peace

The Jerusalem YMCA stands as a monument to peace and coexistence.

You'll find this venerable institution across the street from the Kind David hotel, at 26 King David St. It's the building with the tall tower and lots of cypress trees. As far as Jerusalem hotels go, the YMCA offers simple accommodations in a great location and hard to beat prices. But it is so much more than a hotel!

The building was intended as a place to serve people of all creeds and nationalities in the Holy Land. The idea was that of Dr. A.C. Harte, the YMCA head in the 1920s and it was designed by Arthur Louis Harmon, the architect whose firm also designed the Empire State Building in New York. 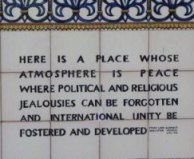 When it comes to symbolism, the Jerusalem YMCA positively drips with it! The entrance plaza has 12 cyprus trees to recall the 12 tribes of Israel. There are 40 pillars in the courtyard in memory of the 40 years the Israelites spent in the desert.

As you walk through the building, pay attention to small details - the columns are all topped by either sculptures of biblical figures, animals, flora, or scriptural passages.

For a paltry 5-shekel entrance fee, you can walk up the 195 steps to the top of the tower. Near the top, you'll pass the tower's carillion. (Note the bells carved in the tops of the columns here.)

At the top of the tower is a room with four balconies from which you can get a great view of Jerusalem in all directions.

When the YMCA opened it had the city's first heated pool and first gym, which made it a very popular meeting spot. Until 1991, it had the only soccer field in town.

It continues to run multiple cultural, sports and educational programs, a preschool, a senior's club and language courses. The Jerusalem Rotary Club has been meeting here continuously since 1935.

As far as Jerusalem hotels go, the YMCA's - officially known as the Three Arches hotel - has 56 rooms, simply equipped (bring your own toiletries) but very clean. The lobby is spacious and quiet. The restaurant serves breakfast, and the pool and gym are free for hotel guests.

Find the best deal, compare prices, read what other travelers have to say about the YMCA, or make your reservation now.