Jerusalem is a magnet for world leaders and so the David Citadel hotel and other luxury Jerusalem hotels provide superb service and pampering to rival the world's best.

Voted one of the best hotels in the Middle East!

The David Citadel scored sixth place in the Conde Nast Readers' Choice Awards for the top ten luxury hotels in the Middle East. Readers loved the location, with the great views of the Old City, the nearby luxury Mamilla Mall, and the undeniable classiness of the place.

Jerusalem hotels scored two spots on the coveted list - the other Israeli hotel to earn a ranking is the Inbal Hotel, which came in fourth.

Make your reservation at the David Citadel Hotel now. 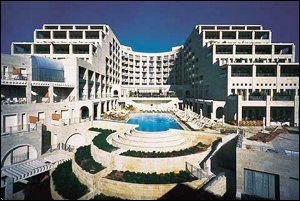 The David Citadel is the modern luxury alternative in town. U.S. President George Bush might have preferred the King David, but this is where Condoleeza Rice liked to stay when she was in Jerusalem.

As its name suggests, one of the hotel’s best features is its sensational view of the Tower of David, especially at night. The outdoor pool also faces the Old City.

Not only is there a gym with state-of-the-art equipment and exercise classes, including spinning, yoga and pilates, there's also fully developed spa. The spa offers the full menu of facials, manicures and other beauty treatments, plus a variety of massage therapies and reflexology treatments. The "couples pampering treatment" indulges partners with a massage followed by a stint in a private Jacuzzi with a glass of champagne. If you want truly relaxing splurge, this is the place.

While it isn’t the most important point on which to judge a hotel, I admit being partial to small touches like the designer toiletries in the rooms.

Mom and Dad aren't the only ones being pampered here. Each afternoon, the kids can enjoy the Children's Play area, a playroom in which some of Jerusalem's landmarks have been recreated for children to enjoy, crawl through, bounce on or simply chill in.

Located on King David St., in the center of town.

Kosher Rabbanut (The restaurant will arrange for mehadrin supervision for groups by special request.)