The most common ancient Hebrew alphabet is Ktav Ivri, sometimes referred to as Paleo-Hebrew. It was in use from the 10th century BCE until the first century CE.

Although the general consensus in the Talmud is that the Torah was given in Ktav Ashuri, there are some opinions that the Ten Commandments were written in Ktav Ivri. The minority opinion seems to have won out in Hollywood, since the tablets Charlton Heston holds up in the 1956 movie The Ten Commandments are written in - you guessed it - Ktav Ivri.

The Dead Sea Scrolls, however, support the Talmudic conclusion that Ktav Ashuri was a holy script, reserved for scholarly writings and that Ktav Ivri was the more popular script for mundane purposes. It appears to be derived from the Phoenician script, to which it is very similar. After the Babylonian exile, however, Ktav Ashuri slowly became more popular, eventually replacing Ktav Ivri, except among the Samaritans, who continue to use the script to this day.

It is the script you'll find on many ancient artifacts. 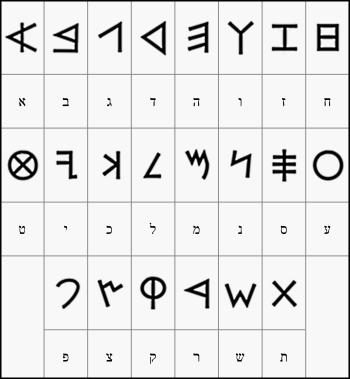 Here is an example of Ktav Ivri on coins from the era of the Bar Kochba revolt. This was the third, and last, of the Jewish rebellions against the Roman Empire. It lasted from 132 C.E. to 136 C. E. and actually established an independent State of Israel over parts of Judea that survived two years before being crushed by the Romans.