The Weather in Jerusalem
Season by Season

The weather in Jerusalem is usually very predictable. There are two distinct seasons in the center of Israel: winter and summer. In between, we're graced with a few delightful weeks of spring.


Fall doesn't really happen much around here - we seem to segue from summer right into winter weather that just gets progressively colder through February.

To help you decide when to plan your trip to Jerusalem, according to the climate you prefer, or what to pack, we've put together here the pros and cons of the weather in Jerusalem at each time of year - season-by-season, with the reasons why every time of year in Jerusalem is really our favorite!

Summer here runs from May to September.

The one sure thing about this time of year: it will not rain. This is great when you're on tour, because if you don't mind a little heat, you can count on sightseeing every day of your trip without rain or storms to stand in your way. 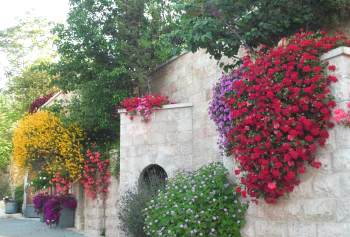 Summer nights in Jerusalem can in fact be a bit on the chilly side. Strolling around the city in the evening is the height of romance, but you may be surprised by how much the temperatures can drop, even on a very hot day. Pack a light jacket to bring along when you go out at night, just in case.

There may be occasional hamsin – dust storms with hot dry winds and temperatures up to 40C (104F), during which you just want to batten-down the hatches and huddle inside with an ice-cold lemonade – but these don't happen that often and usually break within a few days. Intrepid travelers need not fear, however: if you can stand the heat or you're traveling in an air-conditioned tour bus - the show goes on.

Most tourists to Israel come in the summer and the weather seems to respect that and behave accordingly - you can almost be guaranteed blue skies and sun. Therefore, bring cool clothing, sun hats, sunscreen and good walking shoes. Don't forget sunglasses, either, because the sun glares off the white Jerusalem stone and the whole city shimmers.

One important thing - take a large water bottle with you wherever you go. Israelis don't leave home without it, and neither should you. It's easy to get dehydrated in this kind of weather without even noticing, so take care to drink plenty of water, frequently.

We love summer weather in Jerusalem because:

Weather in Jerusalem in the winter is a bit less predictable than in the summer.

The wet season starts in November and goes through April. Every few years, we're lucky enough to get a light snowfall and the whole city grinds to a halt so everyone can get out and enjoy the wonder, but most of the time, it just doesn't get cold enough for snow. 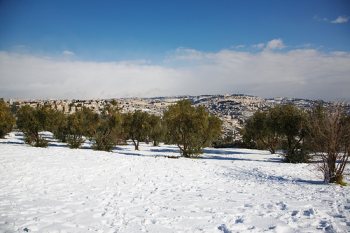 A rare snowfall in Jerusalem. Photo by Brian Negin, under a cc-by-2.0 license

Because Israel’s water supply is so dependent on rainfall, Israelis hope, pray and beg the Heavens for winter rains.

A particularly torrential rain is know as “rains of blessing” in Hebrew, so you won’t hear anyone grumble about a rainy day here – not even little children.

The first winter I was in Israel, I lived across the street from a kindergarten. I was surprised one day in November to hear the roar of a stampede as all the kids ran into the schoolyard outside screaming. In a panic, I rushed to the window to see what had happened.

On the sidewalk beneath my window, 40 five-years-olds were jumping up and down, dancing and shouting with joy, their faces turned up to the sky: it was raining for the first time of the season. They stayed out there reveling amid the raindrops, getting thoroughly soaked for a good twenty-minutes. The teachers were out there, too, just as thrilled as the kids.

Most years, it doesn’t rain nearly enough, though, so you can count on a good number of mild, sunny days in the winter, too.

Nevertheless, make sure you bring waterproof boots and coats. Try to get a raincoat with a hood. It can be so windy when it rains that umbrellas are useless. Since most waterproof raincoats are fairly thin, pack some warm sweaters to layer underneath.

If you don't mind the wet and prefer mild weather to summer heat, then try to plan your trip for early winter. There are usually fewer tourists and smaller crowds, airline fares tend to be lower, and with so many Jerusalem museums to choose from, you can always find an interesting shelter from any heavy rains.

January and February are the coldest months of the year and every few years Jerusalem is treated to a spectacular snowfall that turns the city into a still, fairy wonderland.

We love winter weather in Jerusalem because:

Spring in Jerusalem is that fleeting two to three-week period, sometime in late March or April, when almond trees blossom pink on every corner and blood-red poppies riot in empty lots and road dividers.

You might still get caught in an occasional shower, the air smells sweet and the weather’s warm one day, chilly the next, trying to decide what season it is – before the heat and endless blue skies of summer come to stay. Not knowing exactly what to expect is part of the thrill of spring. 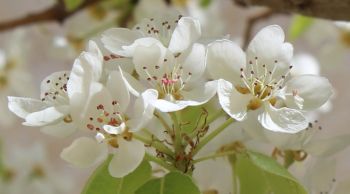 Bring waterproof coats and boots, warm sweaters and lighter clothes - anything could happen in these weeks.

This is the best time to visit the Botanical Gardens and to enjoy the variety of wild flowers of Israel that creep up even between the sidewalk cracks.

It's also the time of several major religious holidays, when pilgrims Jewish and Christian flock to Jerusalem holy sites and so there's the added excitement of that tangible holiday feeling in the air. This means lots of traditional holiday meals and seasonal treats, school holidays, yearly parades and events and many a family out for a picnic in the park.

It's not too hot, it's not to cold and everything is blooming - it can be the best time of the year.

We love spring weather in Jerusalem because: 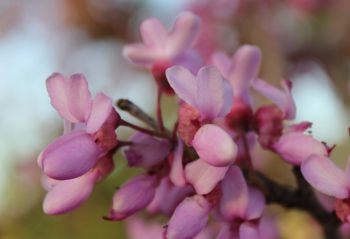 Well ... what’s not to love about spring time and almond blossoms?

There's always something special about the weather in Jerusalem, no matter what the season!