The tomb of the Prophet Samuel lies to the north of Jerusalem. Built on the heights, it is a sentinel overlooking the city and the desert beyond, visible from miles around. It has been an outlook, protecting the city, for over a thousand years. As such, over the centuries the traditional resting place of Samuel the Prophet has seen armies clash at its feet, conquerors come and go, and pilgrims of many faiths assembled in worship. 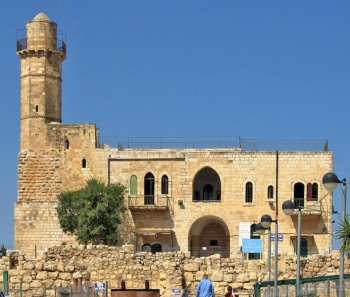 The site offers breathtaking views of Jerusalem, especially from the roof of the structure. There is mosque here, built on the ruins of a Crusader fortress, as well as a small synagogue.

In Hebrew, it is known as Kever Shmuel and in Arabic as Nebi Samwil

We know from the responsa of Rabbi David ben Solomon ibn (Abi) Zimra (the Radbaz), a 15th century scholar, that this was a site of pilgrimage already then, where Jews came to celebrate upsheren, the ceremonial first hair-cut of three-year-old boys, particularly on the 28th day of the Jewish month of Iyar, the anniversary of Samuel's death. Samuel was a nazir – he had made a vow never to cut his hair – so the custom seems appropriate. To this day, crowds gather on the 28th of Iyar (which coincides with Yom Yerushalayim, the day of Jerusalem's reunification in 1967) to celebrate upsheren, continuing the ancient tradition.

Public Transportation: From the Central Bus Station, take the 31, 32 or 67 bus to Ramot Junction and switch to the 36 Aleph line. The trip takes about 30 minutes, depending on traffic.

History of the Tomb of the Prophet Samuel

Is the Prophet Samuel really buried here? Jewish, Christian and Muslim traditions tend to hold that it is. However, the Bible says Samuel was buried in his hometown of Ramah. 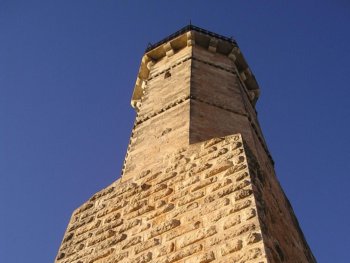 Benjamin of Tuleda, who recorded his travels through the Holy Land in 1173, said the Crusaders had "discovered" the remains of Samuel in Ramle (which the Crusaders appear to have confused with Ramah) and brought them to be reinterred here. Tuleda writes there was a church dedicated to Samuel at this site. It is possible the Crusaders sought to invest more meaning to this mountaintop, for it was here that, on June 7, 1099, the soldiers of the First Crusade had their first, awe-inspiring view of Jerusalem. They build a large fortress, which was razed by the Mameluks in the 12th century.

Nevertheless, the location has a far more ancient history. Archaeological excavations in the 1990s unearthed evidence of Jewish settlement from the First Temple period, and a large villa and out-buildings from the Hellenistic era.

The mosque dates from 1730, although the minaret was rebuilt after being completely destroyed in 1917. 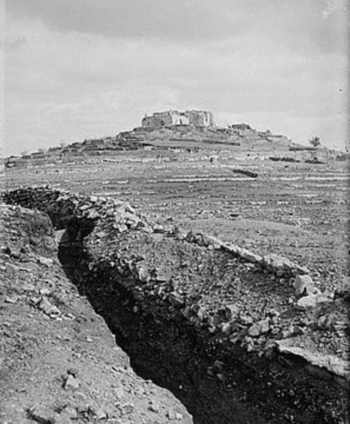 Nahalat Yisrael, a Jewish village, was established on the mountaintop in 1890. Heavy fighting between the Ottoman Turks and the British in 1917 caused the inhabitants to flee. They returned in 1921. The area was an Arab stronghold during the 1948 Arab-Israeli War and was vital to enforcing their siege of Jerusalem. Between 1948 and 1967, the Jordanian army used it as a base from which to bombard the city below. 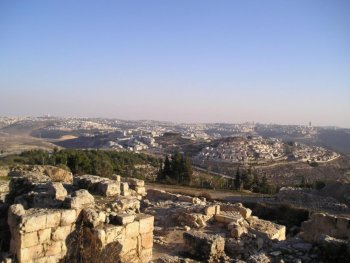 Today, the tomb of Samuel the prophet and the surrounding archaeological area form a National Park and the city of Jerusalem stretches at its feet almost as far as the eye can see.

Return from Tomb of the Prophet Samuel to Jerusalem Holy Sites