Glimpses of shekels and Israel history

The Israeli currency is the New Israeli Shekel, sometimes abbreviated as NIS. In Hebrew, the symbol for the shekel is made up of the first letters of the words shekel hadash: ₪. Nobody calls it anything other than the shekel, though.

Israeli currency is based on a decimal system: 100 agorot to 1 shekel.   The Bank of Israel has done away with anything smaller than a 5 agorot coin, however, so even though many prices are listed as “so many shekels and 99 agorot” (sound familiar?), the prices will be rounded up when you pay. That’s unless you use a credit card, in which case you’ll be charged the exact sum. 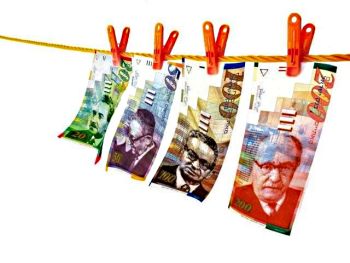 The new 20 shekel bill is made out of plastic. No joke – it gives a new meaning to paying with plastic! Eventually, all Israeli bills will be made this way. Plastic bills are supposed to be harder to counterfeit and last longer than paper ones. Perhaps. But they are also hard to keep folded and keep popping out of your wallet, so keep an eye on them!

Shekel coins are made of a nickel alloy and increase in size as they go up in value. Be careful not to confuse the 1 and 2 shekel coins, as they aren’t that different in size. Mind you, they're only about half the size of the photos below, but this way you can really see the ancient script on the 1 shekel coin and the sheaves of wheat, grapes and pomegranate on the 2 shekel coin. 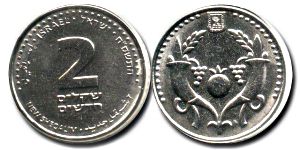 The 5 shekel coin is not a perfect circle – it is actually a dodecahedron, 12-sided, but as the sides wear down, it looks much like a circle. 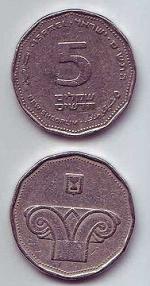 The 10 shekel coin is steel with a brassy center and ridged edges. 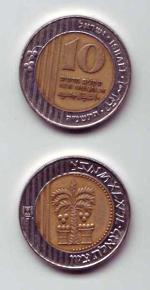 Agorot coins are copper and also go up in size with value.

Israel currency gives you little snapshots of Israel history. Some references are to ancient history. For example, the candelabrum on the 10 agorot coin is a replica from a coin issued by Mattathias Antigonus (37 - 40 BCE). The 1 shekel coin, with the lily, is based on a Judean coin from the Persian period (6th-4th century BCE), and the words “for the redemption of Zion” appear in ancient Hebrew on the 10 shekel coin, just as they did on a coin from 69 CE, during the Jewish rebellion against Rome.

Other motifs are more modern: the image of the unfurling of the Israeli flag at the United Nations for the first time on May 12, 1949, that appears on the 20 shekel bill; or the portrait of Shmuel Yosef Agnon and the excerpt of his acceptance speech when he was awarded the Nobel Prize for Literature in 1966 which are featured on the purple 50 shekel bill.

Have your say about what you just read! Leave me a comment in the box below.

Download our guidebook, Introduction to Jerusalem: A Guide to the Holy City and you'll know:

and so much more.

"As we had limited time in Jerusalem, I purchased your guide book and found it very informative. Thanks!"
- Brian, S. Africa