The Tower of David

The Tower of David, also known as the David Citadel, is just inside Jaffa Gate.

The museum walks you through 4000 years of ancient Jerusalem Old City history and there’s a great view of the city from the tower. 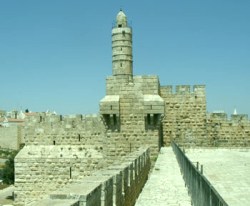 This is also the location of Jerusalem's famed sound and light show.

The Tower of David's only connection to King David is that he was probably the first to fortify this site.

Nevertheless, the foundations of this structure are at least 2,000 years old. They were built by the Hasmoneans.

Over the centuries, they have been added to, destroyed, rebuilt or renovated by King Herod, the Romans, Muslims, Crusaders, Mamluks, Ottomans, British, Jordanians and Israelis.

The present fortifications were built in the 2nd century BCE. After the Fall of Jerusalem in 70 CE, this is where the Roman 10th Legion was stationed.

The David Citadel has served many purposes besides its principal function as a military outpost. In the 4th century, it was a monastery. The Crusaders built the moat around it and used to protect pilgrims. For 400 years it was a Turkish garrison. In 1917, the Ottoman Empire formally surrendered Jerusalem to the British in front of the citadel.

General Allenby stood on the steps that lead up to the museum when he formally declared Jerusalem to be under British rule.

The British were the first to use the Tower as a cultural center.

When the Old City fell to the Jordanians, it resumed its military purpose – Jordanian snipers used the Tower’s ramparts as a position from which to shoot Israeli civilians in the streets below.

After the Israelis liberated the city in 1967, they renovated the David Citadel to serve once more as a place of culture and education.

Today, it is the only museum in the world dedicated exclusively to the history of Jerusalem.

In addition to its usual displays, the museum hosts a variety of art exhibitions and concerts throughout the year.

There are often fascinating displays on specific periods of Jerusalem's history. During school vacations, the museum provides a  host of hands-on children's activities.

Because there are so many multi-faceted layers of history in this relatively small enclosure, to get the most out of your visit, we highly recommended that you have a tour guide or at least a good guide book in hand.

English tours are Sun-Thurs (and Friday during July/August) at 11:00.