Learn Aramaic Online
Jerusalem's Once Upon a Time Language

Learn Aramaic and another dimension opens up: it is the language of prophets, the dialect of the early Christians and the tongue of Talmudic study. It's what you’ll hear if you walk past the open windows of a Jewish study hall in Jerusalem on a summer day and listen to the students learning.

Just as English is the international language of our times and Latin once enabled people to communicate all over Europe, Aramaic was the lingua franca of the Middle East and beyond from the days of the Second Temple well into the Middle Ages. Aramaic documents have been found as far east as Bactria, in what is now Afghanistan and Pakistan, and China. 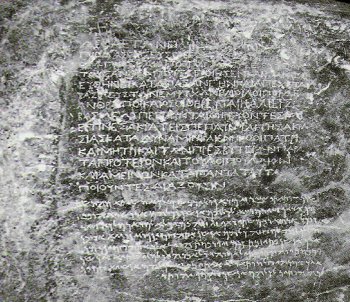 A 3rd-century bilingual stele, Greek above and Aramaic below, today in the Kabul Museum.

The Aramaic language has been written for almost 3,000 years and perhaps spoken for longer than that – some Jewish sources claim it was the language Adam spoke. It was the language spoken throughout Israel in the days of the Temple and the daily tongue of Jesus and his disciples. Certain sections of the Bible are written in Aramaic: two words appear in Genesis 31:47, as well as Yirmiyahu (Jeremiah) 10:11; Daniel 2:4 through 7:28; and Ezra 4:8 through 6:8; and 7:12 through 26. Sections of the New Testament were also written in Aramaic. Targum Onkelos is an Aramaic translation of the Torah.

Other important documents in Aramaic include parts of the Dead Sea Scrolls, the Bar Kochba letters, which provide a glimpse at the spoken language of Israel shortly before the destruction of the Second Temple, second-century texts from Uruk in present day Iraq, and the Elephantine documents. 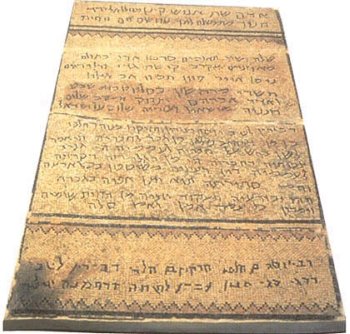 Today, Aramaic is alive in the study halls of yeshivas, where Talmudic scholars pore over sacred texts, and it is still spoken by about 400,000 people, most of them Christians, Jews and Mandeans living in small communities in Iraq, Iran, Syria and Turkey. Syriac, the liturgical language of some of the Christian eastern churches, is an Aramaic variant.

Aramaic is a Semitic language. Written Aramaic uses consonants and goes from right to left. Every Middle Eastern script and several in the Far East can trace their roots to Aramaic letters. Originally, Aramaic used the Phoenician alphabet. The letters evolved over time. Hebrew script is most similar to the Aramaic script used in the 5th century BCE. Cursive Aramaic scripts led to the development of the Syriac and Mongol alphabets.

Today, modern Aramaic, as well as the Aramaic of the Talmud, are written using the Hebrew alphabet.

It isn't so simple to learn Aramaic. After all, it isn’t exactly a language you pick up on the playground or street corner. It’s been the province of yeshiva halls and university scholars. However, short of joining a yeshiva or taking a university course, there are some books you can use to learn on  your own, such as this one.

Return from Learn Aramaic to Learn to Speak Hebrew page