First century Jerusalem was a bustling metropolis on the brink of disaster. And yet, architecturally and culturally, this was also one of the most prolific periods of Jerusalem history.

The upper and lower city

In 19 CE, the Romans installed Herod as king. Herod (37-4 BCE) promptly launched one of the most ambitious public building projects in antiquity and turned Jerusalem into a stunningly beautiful city. His most famous project was the extensive renovation of the Temple, but he also built many other buildings in Jerusalem and throughout Judea.

The best way to make Jerusalem history come alive and imagine it in the first century is to visit the model at the Israel Museum. This large-scale model reconstructs the city as it was in the year 66 CE.

This was four years  before the destruction of the second Temple, the period during which the Dead Sea scrolls were probably being written, and the very beginnings of Christianity.

The city included not only the Temple Mount and the lower city (the area of the present day Ophel Archaeological Park and the City of David), but also the upper city (the present day Armenian and Jewish quarters). Right next to the Temple, Herod razed the HaBirah Fortress and replaced it with the imposing Antonia Fortress. 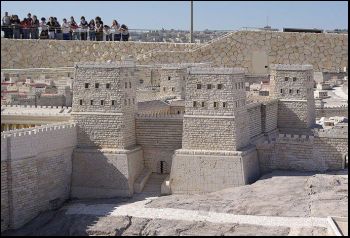 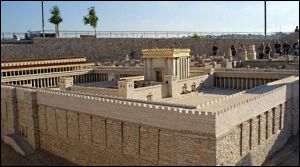 The Temple in Jerusalem

The model began as the work of Hans Koch, the owner of the now long-gone Holyland Hotel. On my first trip to Israel, when I was just a child, we stayed in that hotel and the model was in the hotel's garden.

Koch commissioned historian Michael Avi-Yonah of Hebrew University to build the model in memory of Koch's son, Yakov, who was killed in the War of Independence in 1948.

The model was based on archeological finds and the works of Josephus. Archaeologists continued to contribute to the project over the years as digs around the city revealed more information.  Some parts of the model we know are extremely accurate, while others are still conjecture.

In 2006, after the demise of the hotel, the model was moved to the Israel Museum.

You can see the model on display at the Israel Museum.

Bring a hat or parasol - there is no shade, and you'll want to take your time exploring ancient Jerusalem.