Jerusalem’s newest and tallest landmark is its Calatrava bridge – officially Gesher Hameitarim, the Bridge of Strings.

The bold structure was designed by award-winning architect Santiago Calatrava, known for his many visually striking bridges and buildings around the world. (See Calatrava - Complete Works 1979-2009

by Philip Jodidio for a comprehensive look at his important designs.) 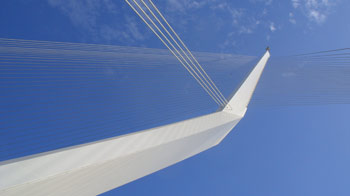 Calatrava has noted that the word religious is from the Latin "to create a link." Like a bridge, which connects one point to another, his soaring Bridge of Strings is designed to allude to King David's harp and create links in the Holy City.

The bridge is situated at the entrance to Jerusalem as you approach it from Tel Aviv. It is the tallest structure on the Jerusalem skyline. The 360-meter bridge is supported by a 119-meter high tower and 66 cables. It spans a large intersection where the highway from Tel Aviv and major Jerusalem arteries meet.

Designed to transport the light-rail trains over vehicular traffic at the intersection, the Bridge of Strings also includes a pedestrian pathway made of glass. 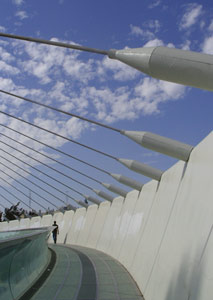 Walking the bridge can be rather unnerving. The sides of the pedestrian walkway overlooking the street are clear, which lets you gaze at the traffic below. The floor is opaque, so while you don’t actually see the cars under your feet, you do see lights and shadows playing beneath you. The effect is a bit like walking over a river reflecting sunlight, while the cantilever and cables soar above, reaching for the sky.

It's all very poetic, but not for the faint of heart or those who prefer to have their feet planted firmly on the ground. I did it once to bring you these photographs, but since then, I’m sticking to the street crossings under the bridge! 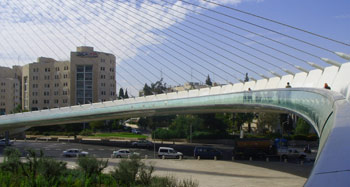 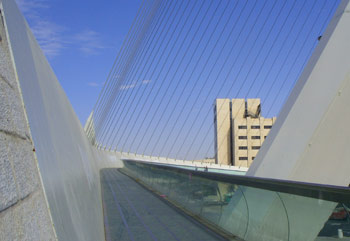 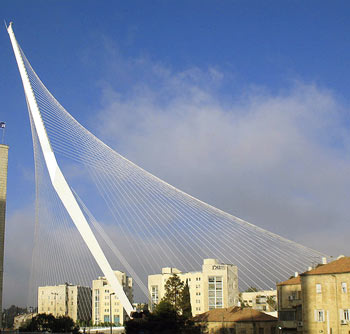