The history of Jerusalem begins at the dawn of time ...

Ancient Jerusalem is still alive today – a walk around the city proves it. At any corner you’ll find reminders of Jerusalem history from a hundred or a thousand years ago.

Excavations in and around the Old City continue to uncover the history of Jerusalem on a daily basis. The more archaeologists find, the more they confirm the history we learn from the Bible.

Ancient Jerusalem began over 5000 years ago. The Book of Genesis mentions a city called Shalem, ruled by Melchizedek. Most historians as well as Jewish commentators believe this refers to Jerusalem. Jewish tradition believes the city was founded by Shem and Ever, a son and grandson of Noah, and that Melchizedek was actually Shem’s title – the word means “righteous king” in Hebrew.

The first archaeological evidence of ancient Jerusalem are some ceramic shards found in the area just east of the Dung Gate, known today as the City of David. These shards attest to human settlement here in the Chalcolithic period (c. 4000 BCE).

The next finds give us a glimpse in the Bronze age (c. 3000 BCE), from which period we find houses, pottery and burial caves carved out of the rock. It seems Jerusalem was built and destroyed several times during the Bronze age and there are few archaeological findings.

By c. 2000 BCE, however, we have much evidence of the Canaanite city of Shalem. Around 2000-1800 BCE, we find the first mention of the city of Jerusalem in Egyptian texts. Egypt ruled Canaan at the time. Jerusalem and Shechem are the only two Canaanite cities mentioned in Egyptian documents for over 200 years. Later, only Jerusalem is mentioned.

Archaeologists have found the city’s fortifications and remains of a guard tower from this period. The wall included the Gihon spring, the city’s water source. Apparently the walls are exceptionally strong for this period, and parts of them were included in the walls that surrounded Jerusalem in the days of the first Temple.

For the next 500 years, Jerusalem covered between 7 to 10 acres (30-40 dunam). It was an important city, with a fortress, and an Egyptian garrison stationed there. It controlled the area up to Shechem to the north, Jericho to the east, Hebron to the south and west to the coastal plain.

The Egyptian El Amarna letters document that Jerusalem apparently grew too powerful for its neighbors’ liking and a group of city-states banded together to raid the city. The ruler of Jerusalem sent at least six letters to Egypt, begging for military aid, but to no avail. Egypt refused, transferred its garrison to Gaza instead, and what happened to Jerusalem is a mystery – did it fall or survive?

Joshua and the Children of Israel

If it fell, it wasn’t for long. Two hundred years later, when Joshua and the Children of Israel crossed the Jordan into the Land of Canaan, it was the king of Jerusalem who united the local tribes to fight against them. The king was killed and the tribes defeated in a battle west of Jerusalem. Nevertheless, Joshua did not take the city. The Book of Joshua (15:63) tells us that, "as for the Jebusites settled in Jerusalem, the tribe of Judah could not drive them out; the Jebusites lived beside the tribe of Judah in Jerusalem to this day." 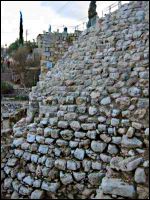 Conquering Jerusalem was no simple matter, however. The Bible tells us King David had to call for volunteers and promised that person who successfully captured the city would be made commander in chief of his army.

Sometime between 1007 and 1010 BCE, Yoav used a “tzinor” to defeat the city. “Tzinor” is often understood to mean a tunnel, which gave rise to the theory the Israelite forces entered the city through the secret tunnel dug to connect the Gihon spring to the city.

David made Jerusalem his capital. By choosing a neutral site, he consolidated the Israelite tribes. Immediately, he brought the Ark of the Covenant to Jerusalem, but it was not until 24 years later that he decided to build the Temple on the site where Abraham had bound his son as a sacrifice, and where Jacob had his dream of angels ascending and descending on a ladder.

When David conquered Jerusalem, it was a small city of about 15 acres (30 dunam). He built a royal palace, which was discovered by archaeologists just recently. You can visit some of the excavations at the City of David.

King David passed away in 967 BCE and was succeeded by his son, 16-year-old King Solomon. Solomon greatly expanded the boundaries of his kingdom – he ruled from Damascus to Eilat – and of his capital as well. He built a new royal complex above the City of David, in the area known as the Ophel. 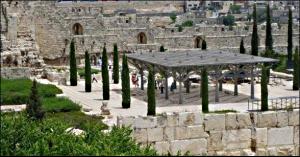 Today, the area is known as the Ophel Archaeological Park. Above the Ophel, Solomon built the First Temple. He then built a wall surrounding the Temple, the Ophel and the City of David below.

The Kingdom of Judah

In the civil war that followed King Solomon’s death in 927 BCE, the kingdom split into two (Israel to the north and Judah to the south). For the next several centuries, Jerusalem was the capital of the kingdom of Judah.

During the reign of King Uzziah (785-733 BCE) the city grew and new towers and fortifications were built.

One of the problems that plagued ancient Jerusalem was the lack of water. Although it was built atop a mountain, ancient Jerusalem 's water source, the Gihon spring, lies in a valley below. This was extremely hard to defend and left the city vulnerable in time of siege.  The solution was to dig a underground shaft from within the city walls through which to reach the spring.

The earliest shaft (Warren’s shaft) is the one possibly used by King David’s forces to conquer ancient Jerusalem. Not long after Warren’s shaft, a channel was built to carry water from the spring to a reservoir in the Tyropoeon Valley. The Silwan channel tells us that ancient Jerusalem already covered the areas of the Jewish and Armenian quarters of the Old City.

Hezekiah had more ambitious plans. He built an underground tunnel cut through the rock to bring water from the spring to a pool inside the city walls. Two groups of workers began at either end of the tunnel and met in the middle, an amazing technological feat for the time. This public building project is chronicled in the Bible (II Kings 20:20, Isaiah 22:11 and II Chronicles 32:2-4) and confirmed by the Hebrew inscription in the tunnel at the point where the two teams of workers met.

Wading through Hezekiah’s tunnel is one the excursions children love best in Jerusalem.

The City of David Excavations 2005 at the Visitors Center Area

is a preliminary report by Dr. Eilat Mazar, the archaeologist heading the City of David excavations, where stunning new finds are uncovered almost every week. Technical, but absolutely fascinating.

Translated by W. Moran, The Amarna Letters let you read the diplomatic correspondence between Egypt and the Canaanites for yourself - it's a glimpse into the past, and a reminder that politics haven't changed all that much!