Follow the Footsteps of
Jesus in Jerusalem
and make Bible history come alive!

Follow in the footsteps of Jesus in Jerusalem - there's no better way of making Bible history come alive!

Although there is no actual archaeological evidence of Jesus in Jerusalem, here we trace the Jerusalem locations that appear in the New Testament’s record of his life.

Walking around these sites, Jerusalem history takes on new meaning as you imagine the city in the days of the Second Temple, as it was when Jesus saw it.

We are told that Jesus came to Jerusalem with his parents when he was twelve and visited the Temple.

You can still see the remains of the steps leading to the Temple and of the lively market beneath them in the Ophel Archaeological Park.

In the Footsteps of Jesus in Jerusalem

After that first visit as a child, we next meet Jesus in Jerusalem as an adult, already a teacher with disciples. 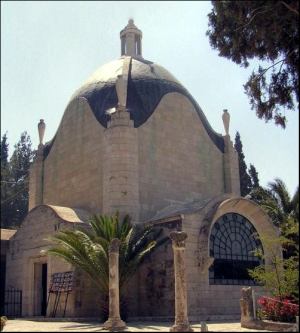 In Latin, Dominus flevit means “the Lord cried.” This church commemorates the spot where, upon the arrival of Jesus in Jerusalem, he stood overlooking the city and cried over its future destruction.

There are remains of a Byzantine chapel here, but the building we see today was built in the 1955 by the famed Italian architect Antonio Barluzzi (who designed many of the churches around Jerusalem.) He incorporated a stunning view of Jerusalem as part of the architectural design and the roof is shaped like a tear.

The Pool of Shiloah 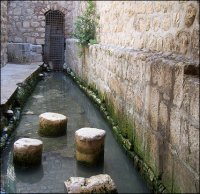 The book of John records that Jesus restored a blind man’s eyesight at the pool of Shiloah(also Siloam or Silwan). The Shiloah pool is the end of the Shiloah channel that was dug in antiquity to bring water from the Gihon spring to a reservoir inside the city walls. When you hike through Hezekiah’s tunnel, this is where you’ll end up – by the Shiloah pool. 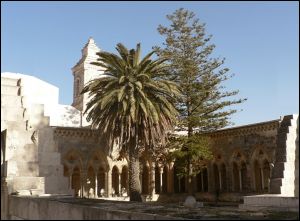 This marks the spot where Jesus taught his disciples the Lord’s Prayer. Accordingly, this church boasts ceramic mosaics of the text of this prayer in 44 different languages. Helena, Constantine’s mother, originally identified this location as the site of the ascension, but several decades later the site where the Chapel/Mosque of the Ascension stands today was chosen instead.

The Cenacle – the Room of the Last Supper 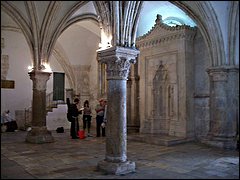 The Cenacle, on Mt. Zion, is where tradition says Jesus held the Last Supper with his disciples. The room is on the second floor of a building that is probably the only one in the world to house a tomb, a yeshiva, a church, a mosque and a kindergarten!

Did it really happen here? Nope - wherever the Last Supper of Jesus in Jerusalem took place, it wasn't here. The Last Supper was held in a room near King David’s tomb. This traditional site of King David’s tomb, while a beloved Jewish place of prayer is not really King David’s tomb and the room above it – the Cenacle – was added to the pre-existing synagogue by the Crusaders, over a thousand years after the event.

In the 15th century, the building was taken over by the Moslems and converted into a mosque in the 16th century. Jews and Christians were only allowed access to the building again in 1948 after the War of Independence. 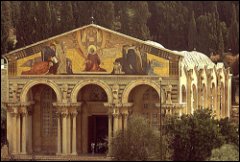 The garden where Jesus came to pray before his arrest lies as the foot of the Mt of Olives. The Church of All Nations and the Church of St Mary Magdalene both over look this quiet place of contemplation. The olive trees here are said to be over 900 years old.

Church of St. Peter in Gallicantu 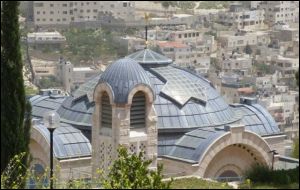 Galli cantus means cockcrow in Latin. The name of the church alludes to the Jesus’s prophecy to Peter that “before the cock crows,” Peter would have disowned him three times, which the Book of Luke tells us is what happened. This is the reason for the rooster on top of the church and on its doors.

Christian tradition identifies this location as the place where Peter heard the cock crow and repented. It is also said to be where Caiphas had his home, and where they imprisoned Jesus in Jerusalem for his last night.

There was a Byzantine shrine here, later replaced by a Crusader church in the 12th century. The church we see today is actually very recent – 1931 – and was renovated in 1977.

Underneath the church is a chapel from which you can see remains of the Byzantine chapel. Below that is a series of caves dated to the time of the Second Temple. Archaeologists have unearthed granaries, water cisterns, an olive press and ritual baths. They believe these were part of affluent homes. Christian tradition, however, claims these were prison cells where Jesus was held.

Outside the church is an ancient paved street, believed to have been the one Jesus walked after the Last Supper to reach Gethsemane. 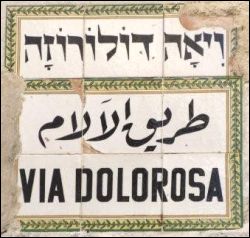 The Via Dolorosa traces the last steps of Jesus in Jerusalem, from the palace of Pontius Pilate to Golgotha.

This is the spot along the Via Dolorosa where Pontius Pilate is said to have presented Jesus to the crowds. The arch was the central one of a three-arch gate built by the Emperor Hadrian over 100 years after Jesus died, so Pontius Pilate never actually stood in or under it, and neither did Jesus. Today, the arch is part of the Notre Dame of Zion Ecce Homo Convent. The two other arches are absorbed into the buildings on either side of the street.

Golgotha and the Holy Sepulcher 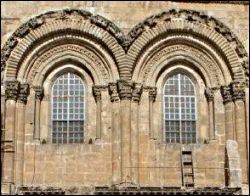 The Church of the Holy Sepulcher, a sprawling structure in different architectural styles, houses both Golgotha – the place where Jesus was crucified – and the cave where his body was laid to rest. 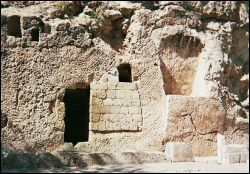 Some Protestant denominations dispute that the burial place of Jesus in Jerusalem is located within the Holy Sepulcher and believe this one to be the correct site. Archaeologists think the evidence points against it, but the Garden Tomb has become a popular Protestant pilgrimage site. 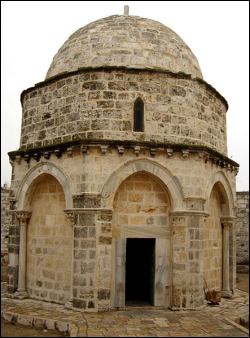 Christianity’s second holiest site (after the Holy Sepulcher) is a very simple construction on the Mt. of Olives. The building marks the spot where Jesus ascended to Heaven. Jews believe it is the burial site of the prophetess Hulda, Muslims believe the mystic woman Rabia Al Adawiyeh is buried here, and Christian tradition says it is the tomb of St. Pelagia.

If you'd like to indulge in a visual tour of Christian sites in the Holy Land or catch a glimpse of what they might have looked like centuries ago, we highly recommend Bibleplaces.com. This site boasts beautiful pictures of Jerusalem, of course, but also of many other places mentioned in the Bible - from Ashdod to Ziklag, passing through Israel, Greece, Egypt and Turkey in between. Enjoy the photos online, or purchase them for use as teaching aids, or simply for your viewing pleasure. The site's blog keeps readers up to date on what's happening in the field of Biblical archaeology. As you plan your trip, and especially if you're interested in following the steps of Jesus in Jerusalem, it'll give you a unique perspective.