Jerusalem Scavenger Hunt
Is A Treasure

It is a perfect day for a Jerusalem scavenger hunt – a gorgeous morning of blue skies and crisp air, delightfully unexpected after days of torrential rain – and we assemble in front of the Sephardi Center on the edge of the Jewish Quarter in the Old City. 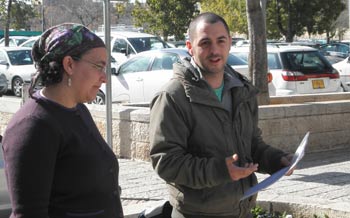 Tali Tarlow, founder of the program, welcomes each individual as the group slowly assembles. Tali, a native of Cape Town, South Africa, started organizing scavenger hunts shortly after moving to Israel. At first she worked with a tour guide, then she was asked to organize some hunts for Nefesh B’Nefesh. Things grew from there, as people who had had the pleasure of participating in one of Tali's scavenger hunts spread the word to friends and acquaintances.

Today's hunters are a select group of bloggers, ready for adventure and armed to the teeth with cameras. More than one person jokes that we aren’t likely to get far, with so many people stopping every few steps to snap a picture for their blogs! 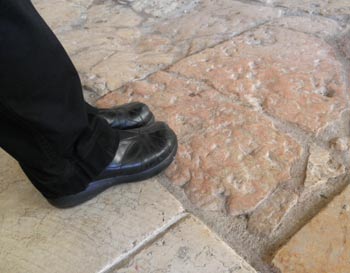 Step into the past: standing on the seam, where ancient pavement stones and modern-day ones meet

After a break-the-ice activity cleverly designed to remind us that we are standing at the center of the universe, right here in Jerusalem, Tali gives us the rules and materials and then sets us loose.

The materials she gives out form the basis of the Jerusalem scavenger hunt. They outline our objectives, give directions, educate, and include an all-important map. Jobs must be allocated among team members, and Tali has created tasks appropriate to a variety of ages, ranging from school-aged children to adults.

The materials also evidence a great deal of thought by an experienced educator. This is going to be no mere fun activity for kids. This is a program designed to engage the hunters with their environment in a deep, intimate way. From the first it is clear that this is meant to be a journey not only through ancient Jerusalem, but also in, toward ourselves.

Many of us on this hunt today have been in the Old City more times than we can count and yet each person on this team discovers something new – an alley never before traversed, a marker never noticed, a story heard today for the first time.

Looking up for clues, we missed this one entirely. What was it?

One of our tasks is to find the grocery store close to the oldest wall in Jerusalem. Instructions: bring back something from this store. Perhaps it is because this team consists entirely of bloggers who spent far too much time inhabiting the virtual world of cyberspace that we don’t choose a physical object as proof of our visit. No lush pomegranates for us. We bring back digital photos and a tale.

It is the story of Rami Mordechai, present owner of the grocery shop, and of his family. The Mordechais arrived in Jerusalem from Kurdistan in 1924 and settled in the Old City. Rami describes the poverty, the close-knit community, the lack of electricity and running water. He describes how his parents were forced to abandon their home in 1948 and how the city was reunited in 1967. Many families who hoped then to finally be able to return to their homes had their dreams dashed when they could not provide the government with title deeds and documents.

Rami shakes his head sadly. "Who thinks to grab papers when you’re running for your life?" he asks rhetorically. "You take clothes for your children and you go – not papers." To this day, he claims, there are former Old City residents who will circumvent the Jewish Quarter on their way to the Wall. It is too painful for them to see the streets where they once lived now occupied by strangers. But, as Rami points out, it is hard to recognize the Rova today. The Jordanians completely leveled the quarter in 1948 and left it a field of ruble for 19 years. All the homes you see today are new.

It's a sad tale, but one that nevertheless embodies hope. Rami stands on the steps of his store, once more in the Old City of Jerusalem. At his feet lie the stones of the Broad Wall, Jerusalem's oldest wall, built by King Hizkiyahu in the 8th century BCE. Despite the many convulsions of history, the Jewish people are still here.

Rami's memories are only some of the treasures we carry home with us from this Jerusalem scavenger hunt. There are also the moving stories of Esther Calingold and ten-year-old Nissim, both of whom died defending the Jewish Quarter in 1948. There is the story of King Hizkiyahu and his wall, of the Emperor Franz Joseph and his dome, the story of the Hurva synagogue's destruction and rebirth, destruction and rebirth. 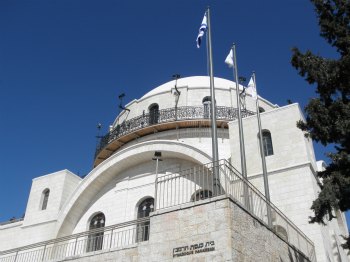 If there is a theme underlying this Jerusalem scavenger hunt, it is best expressed by the Biblical quote carved into one of the walls of Batei Machseh Square, the quote under which this hunt comes to an end: "Thus said Hashem, Master of Legions: Old men and old women will once again sit in the streets of Jerusalem, each with his staff in his hand because of advanced age and the streets of the city will be filled with boys and girls playing its streets." (Zechariah 8:4-5)

To drive the point home, Tali indicates a nearby column, a remnant from the days of the Second Temple period and asks us, "What is the distance from there, to here, this wall where we stand?" A mere few meters and two thousand years of Jewish history come almost full circle. We are home once more.

A Jerusalem Scavenger Hunt of Your Own

Israel ScaVentures offers hunts in a variety of Jerusalem neighborhoods - not just the Old City.

To find out more or book your own Jerusalem Scavenger Hunt, click here

Scavenger hunts typically require a minimum of 4 people, but several times a year Israel ScaVentures also runs "open hunts" that anyone can join, regardless of how many you are.

Click here to find out when the next open Jerusalem Scavenger Hunts will be.