Shushan Purim is unique among Israel holidays - you can only really celebrate it in Jerusalem (or Tiberias, or Yaffo - maybe.)

Purim is one of the most fun Jewish holidays, with children – young and old – dressing up and thronging the streets to deliver gifts of food to their friends. There's music, there's dancing, there are plenty of goodies, in short everything you need to cheer up and celebrate life together. 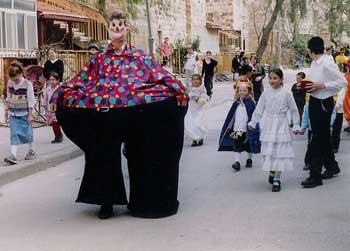 Jerusalem Street on Shushan Purim.
Photo by Yoninah, under a CC by 2.0 license.

﻿If you're in Jerusalem for Shushan Purim, you're in for a treat.   The whole world is outside today, thronging the streets. This is not an aimless mob, however.  The goal is to deliver baskets of food to your friends and still make it home in time for the sumptuous holiday meal, but it's awefully hard when there are so many adorable little children about in amazing costumes.

There's a lot of running around.  There's also a lot of driving around, which you should do your utmost to avoid for two reasons: first, the traffic in many neighborhoods is at a virtual standstill because of the crowds dancing in the streets, and second, because there's also lot of drinking going on.

So, some Purim advice: don't plan on going anywhere that's not in walking distance of where you're staying; get yourself a costume or some funky makeup (or not) and go outside to party!

Around this time, Jerusalem events tend to feature lots of fun concerts and comedy theater and puppet shows, so there's lots to enjoy.

What's Purim All About and Why It's Different In Jerusalem

Purim commemorates the Jews' deliverance from genocide in Persia (modern-day Iran). What happened is recorded in the Biblical Book of Esther: Haman, chief adviser to the king, convinced him to order the genocide of all the Jews in the Persian Empire. Queen Esther – who was, unbeknownst to either her husband the king or Haman, a Jew - asked the king to overturn the order. Rather than rescind his order, he granted the Jews of the realm the right to defend themselves.

The Jews successfully defended themselves against the Persians who rose up to kill them them on the 13th of Adar of the Hebrew month.

In Shushan, the Persian capital, however, the battles continued throughout the 13th and 14th of Adar, and the victory celebrations there only happened on the 15th of Adar.

Therefore, to this day, Jews around the world celebrate Purim on the 14th of Adar. But Jews who live in cities that, like Shushan, were walled in the days Joshua led the Children of Israel into the Promised land, celebrate what is called Shushan Purim on the 15th of Adar.

The only city known with certainty to have been walled at that time is Jerusalem. (There is some question about Tiberias and Yaffo, and thus these cities celebrate both on Purim and the day after.)

This means Jerusalemites get to celebrate a day after everyone else. Not surprisingly, revelers pour in from surrounding cities, in order to enjoy two days of festivities.

Occasionally, we even get a three-day Purim (Purim Meshulash), when the 15th of Adar falls on a Saturday. Some of the commandments of the day cannot be preformed on a Shabbat, so the festivities are spread out from Friday through Sunday.

How to Celebrate Shushan Purim

The best way to celebrate Shushan Purim is to come to Jerusalem, of course!  Barring that, you can always celebrate Purim on the day before Shushan Purim no matter where in the world you are.  It's a wonderful day of joyful merrymaking that children particularly love, full of meaningful traditions. Here's how.

There are four commandments on Purim:

In addition, the custom is for everyone to dress up and make merry.

Purim has become a popular day to collect money for charity. Young groups of students go from door to door, singing, dancing or juggling in exchange for donations for schools, needy children and other philanthropic organizations.

This all makes for a wonderful atmosphere of good cheer and good will, much silliness and lots of fun.