Jerusalem from the sky 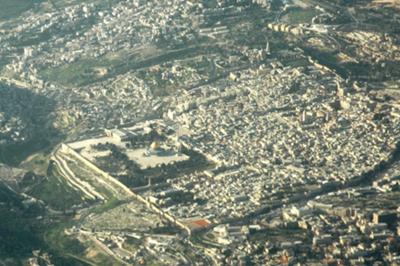 Jerusalem from the sky

Don't be shy when you fly to take photos or video out of the plane window.

On my first visit to Israel, it was a long flight from Australia. But for the last part of the flight, from Bangkok to Israel I had a lovely Israeli lady sitting next to me.

I am not the talkative type and we didn't say too much most of the way but when we started to fly over Egypt up the Red Sea to Israel, she couldn't help see my enthusiasm for looking out of the plane window.

It was a day flight and the sky was very clear. She had the window seat but I asked her if she minded if I took a photo or two out of the window. She was very obliging.

As we came over Israel, she nicely pointed out various places for me. Her English wasn't perfect and we had some translation problems (especially as my Israeli geography was very sketchy).

I took quite a few photos and saw everything on the North West side of the aircraft as we flew up the center of Israel. It was fantastic! I saw many sights I had only ever heard about.

But then she excitedly says, "There's Jerusalem."
My heart raced as I looked out the window expecting to see this big city.

Because we still were at a reasonably high altitude things were smaller than I expected. But then I saw her: Jerusalem.

My heart tripled in pace and I found it difficult to breathe. Jerusalem - I could actually see her with my own eyes.

My most treasured photo is attached. Jerusalem from a El-AL aircraft.

Of course, don't annoy your fellow travellers when taking photos and check the rules of the airline that you're flying on, but don't be shy to take photos from an aircraft and learn the geography of the land. It is well worth it.